I'm not a violent person by nature. I'm more the 'make love not war' type, and I've been known to ask my boxing opponent if we can't just get along, and would they like a hug? In the words of Michael Jackson, I'm a lover, not a fighter. That, and ma ma se, ma ma sa, ma ma coo sa. True that.

So no one was more surprised than my husband when I came home and announced that I had found my true passion, and it was kickboxing. He has since joined me, and we are discovering what the angry and violent have known for some time - hitting things is fun. It is great for cardio-training, strength-building and aggression-releasing, and also builds up your self-esteem, a delicate structure that will be toppled when you actually WATCH yourself boxing on video.

Can you just imagine how intimidating I'd be in a real fight?!

Best of all, this workout really doesn't require much preparation or equipment. Boxing gloves help, but are not necessary. Boxing pads help, as do a punching bag of some sort, ours is named Jon. Again, not necessary. In fact, while on sabbatical this summer, my husband has been instructed to keep up his training by 'shadow boxing', basically hitting the air. Our trainer/punching bag gave us a CD of Bas Rutten, some big shot dutch fighter, calling out punch and kick combinations. It sounds pretty funny as is, but when I put it to music I realized just how out of touch I am with the typical Ultimate Fighter. Imagine an angry dutchman yelling out 'ONE! AND A FOUR! LEFT RIGHT LEFT HOOK! NOW THREE HOOKS!' to the following soundtrack:
So you can see that I'm even less likely to be dee-jaying an Ultimate Fighter 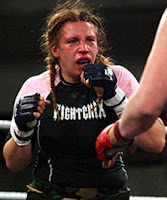 event than fighting in one. Which I have to admit, I considered when I learned that Amanda Lucas, daughter of George, had joined the women's MMA league. How cool is that?

Until I saw her photo... I'm sure she is a lovely lady outside the ring, but this is just not my style. There is blood on her face! And she is all sweaty! That outfit does nothing for her figure, and the fly-aways on her hair are giving me an anxiety attack. Frankly I'm already intimidated, and considering asking her if she would like a hug... after she cleans up, that is.

Email ThisBlogThis!Share to TwitterShare to FacebookShare to Pinterest
Labels: exercise