Taping with the Stars

Heads up fashionistas, KT tape is all the rage this season.  Madonna says so.

For those not in the know, KT tape is a popular method of rehabbing muscular injuries, and also a red carpet outfit.  In the non-celebrity world it is known as kinesiology tape, and when I was a student a hundred or so years ago (class of 1901!) we just called it 'taping'.

Taping is done to increase circulation to an injured tissue, to allow propioceptive input while maintaining mobility, and to affect the efferent pain pathways by modulating afferent input.  What?  That's my take anyway - I haven't yet officially studied this technique, though it's on my chiropractic bucket list.

Madonna recently took taping to a new level, and I was most definitely not taught this particular technique in my basic taping course. 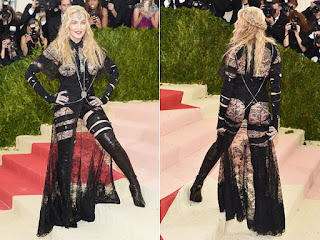 Either Madonna is suffering from bilateral thigh and forearm injuries, which is possible I suppose, or her physio treatment ran late and she had only minutes to throw on her dress and make it to the event in time.  Also, this is the first time in history that kinesio tape has been used on nipples, and I'm certain that applying it was out of the scope of practice for her therapist.

On the other hand, Madonna is very fit and seems very happy, and so who am I to say a therapy works or not?
Posted by Dr. Michelle Fagen No comments: