Born January 24, 2009.  Oliver shares a birthday with both his mother and his paternal grandmother.
6 pounds, 11 ounces of fuzziness.
I'm in love. 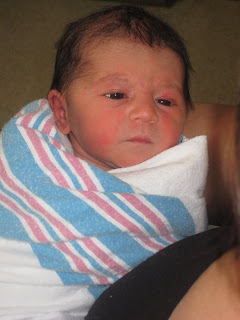 It is now day 10 of the labour strike, but it is unclear who is on strike - the baby or I? Scientists don't fully understand which party initiates labour, who 'gets this party started' as it were. In sheep, where thankfully extensive research has been done, it is the fetus who makes the exit strategy. But my baby is no sheep, and here we are, on day 10 of our stand-off. Silly me for assuming that 41+ weeks of gestation entitled me to a baby, that contractions were part of the contract.

Further attempts at deploying a peaceful withdrawal strategy have included evening primrose oil, more acupuncture, spicy food in every form, meditation, recipes incorporating eggplant and pineapples (eww, not together!), homeopathic remedies and walking every mall and street in Toronto. I've also made tons of dates and appointments I couldn't possibly keep, in the hopes of tempting fate. Instead, I've brunched and lunched, visited the salon and watched long movies, and started, completed and eated 8-hour-crockpot recipes.

A good friend likes to tell me that this is my first lesson in parenthood, that things don't go according to plan. Got it. Lesson learned. Let's move on now, shall we? Surely there are other lessons awaiting me, like how to put on a diaper, or uh, how to raise a child.

There is a lot of talk about induction lately, and January 20th holds much promise. As I watched Barack Obama's induction into office as President of the United States, I thought a lot about my own induction ceremonies, though unlike Obama, mine may include castor oil. These are desperate times, people. It certainly is an auspicious time for a new arrival though, a good day to mark the end of one, full term, and start another, yes?

Yes we can, baby... yes we can.
Posted by Dr. Michelle Fagen 2 comments:

People have much to say about pregnancy, everyone seems to be an expert. Take me, for example - I've written how many posts about having a baby? And I don't even HAVE a baby!

Old wives, new wives and even my plumber all have tales about what to do, what not to do, what to expect when you are expecting. (Interesting fact: I've dealt more with my plumber than my midwife in the last few weeks. Everything water-related seems to be breaking, except my water.) Now that I'm officially overdue, I hear a lot about how to induce labour. I thought I'd sum up my experiences so far.
So, those are my experiences so far. I'm resting now, hoping that tonight's full moon works its lunar magic, but I'm open to suggestions for next week, just in case. I'm thinking: return to work (maternity leave isn't really living up to its name, is it?), trampoline lessons, eat jalapeno peppers, more acupuncture, install new shelving in the laundry room, begging and bribing the baby.
But you know, (love,) there's one more thing to consider - the words of the poet Axl Rose, who said woman take it slow, it'll work itself out fine, all we need is just a little patience...
Posted by Dr. Michelle Fagen 2 comments:

Your lease is up. I assumed it was understood that the current domestic arrangements were temporary, a place for you to stay until you could make it on your own in the outside world.
I also feel that you are too attached to me. Let's try some time and space apart - just a little bit! You'll be fine. Please vacate the premises ASAP.

You've generally been a great tenant, though at times I questioned the hours you keep, and apparently you are a cast member of Riverdance. We can talk about these things on the outside though, after you are born! (and can you get me tickets?)

Frankly you've outgrown your current space, you've run out of womb. The superintendent (your father) and I feel that you should expand your horizons. It is time, baby, to explore the world.

I look forward to meeting with you in person - I'm so excited, I'm literally bursting at the seams!

Respectfully and with love,
Your mother. 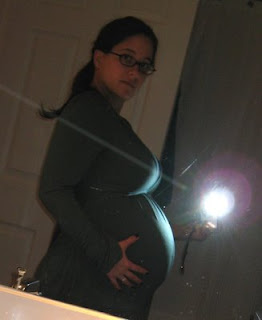