... so we arrived in Rome. They say that Rome wasn't built in a day, but I say they just weren't t

rying hard enough. "pfft..." I spat, "I'll prove 'em wrong and do it in half a day!" First stop, the Flavian Amphitheatre, known these days as the Colosseum (I also shop at Towne and Country mall, it will never be Centerpoint to me...). I was excited to be standing in the midst of such history - the movie Gladiator

was filmed right here! It truly makes you reflect on your existence at this time and place in the universe. I was also fortunate enough to spot a real, live Roman gladiator - smoking. How anachronistic! Maybe this is why the Roman Empire was wiped out?

After the Colosseum, which frankly could use some maintenance and repair, we trekked to the Trevi Fountain. I love this site, mostly because of the fountains at which you can refill your water bottle and rinse your hands and feet of the roman grime they've acquired. Ancient cities and heat don't exactly go well together... we nearly melted. For some respite from the heat we patronized an 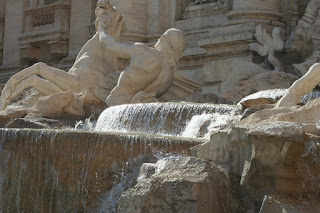 d were patronized at a cafe near the Trevi Fountain. As you can imagine, visiting a restaurant near a major tourist attraction is always an economical choice, and we thoroughly enjoyed the $20 glass of beer and bottle of water. Mamma mia!

After conferring with my accountant it became obvious it was time to leave Italy. And so ended my European vacation. Funny how this trip once seemed eons away, yet the two week trip itself felt equally as long. I'm returned to Toronto more brown, more cultured (I now only eat gelato, not ice cream) and in need of an adjustment!

Email ThisBlogThis!Share to TwitterShare to FacebookShare to Pinterest
Labels: totally unrelated to anything